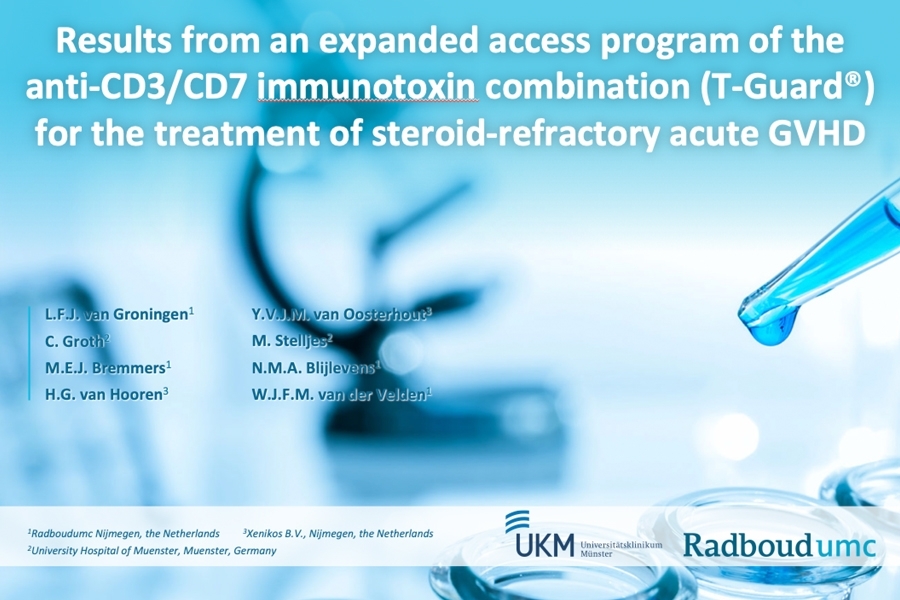 Nijmegen, the Netherlands, December 9, 2019 - The Dutch company Xenikos B.V., which develops innovative immunotherapies for treating patients with severe immune disease and post-transplant rejection, reports today data from an expanded access program (EAP) using T-Guard to treat steroid-refractory acute graft-versus-host disease (SR-aGVHD) in patients following allogeneic stem cell transplantation. These data are being presented later today at the 61st annual meeting of the American Society of Hematology in Orlando, FL, by Walter van der Velden, MD, PhD from Radboud University Medical Center in Nijmegen, the Netherlands. The poster presentation entitled “Results from an Expanded Access Program of Anti-CD3/CD7 Immunotoxin Combination (T-Guard®) for the Treatment of Steroid-Refractory Acute GVHD” can be viewed on the Xenikos website, and the abstract is available here.

In this program, conducted in the Netherlands, Xenikos’ anti-CD3/anti-CD7 immunotoxin therapy T-Guard was given as second- or third-line treatment to 12 high-risk adult patients with grade II-IV SR-aGVHD following allogeneic stem cell transplantation for a myeloid or lymphoid malignancy.

By treatment day 28, 75% of patients had achieved a clinical response, with five of these nine patients achieving complete remission. In addition, the 6-month and 1-year overall survival rate was 75% and 58%, respectively. These outcomes are significantly higher than historical controls and are similar to the results of the Phase 1/2 clinical trial. T-Guard appeared to be well tolerated and no significant infusion-related reactions were recorded.

“More effective therapies for steroid-refractory acute graft-versus-host disease are urgently needed,” said Dr. Van der Velden. “The results of the Phase 1/2 clinical trial and now in the expanded access program show highly promising response rates, including complete remission and overall survival rates that are substantially higher than historical controls. I believe that T-Guard may represent a paradigm shift in how we treat patients with this potentially fatal condition.”

“We’re highly encouraged by the positive results of the expanded access program with T-Guard,” added Dr. Ypke van Oosterhout, Chief Executive Officer of Xenikos. “We are now recruiting patients for our US-based Phase 3 registration trial, marking the next step in taking T-Guard to market. Importantly, T-Guard, which is administered as a single one-week treatment, was previously shown to promote swift restoration of the patient’s immune system, reducing the risk of infection and relapse. We believe that T-Guard is quite promising in terms of treating patients with this devastating condition, and we look forward to entering the final phase of development.”

Citrulline levels are correlated with the clinical response to T-Guard
Dr. Van der Velden and his group also analyzed the relationship between plasma levels of citrulline (a biomarker of enterocytes, which play a role in healthy intestinal function) and the response to T-Guard in a subset of SR-aGVHD patients with GI involvement, including patients from both the Phase 1/2 study and the expanded access program. Their preliminary results show that the patients’ citrulline levels were extremely low prior to the start of T-Guard treatment and increased significantly in the patients who achieved complete remission by day 28, indicating that plasma citrulline may serve as a robust prognostic biomarker.

T-Guard: Helping reset the body’s immune system
T-Guard is designed to safely and swiftly reset the body’s immune system in life-threatening T cell‒mediated conditions, including transplant-related rejection, acute solid-organ rejection, and severe autoimmune disease. TGuard consists of a unique combination of toxin-conjugated monoclonal antibodies that target CD3 and CD7 molecules on T cells and NK cells. Preclinical and early clinical testing have shown that T-Guard can specifically identify and eliminate mature T cells and NK cells with minimal treatment-related side effects. Importantly, T-Guard’s action is short-lived, thereby significantly reducing the patient’s vulnerability to opportunistic infections compared to currently available therapies. Xenikos recently completed a Phase 1/2 study for the second-line treatment of SR-aGVHD in patients following hematopoietic stem cell transplantation, showing that just one week of T-Guard treatment triggered a strong clinical response and doubled the 6-month overall survival rate; these results were published in the peer-reviewed journal Biology of Blood and Marrow Transplantation. T-Guard has been approved by the US FDA as an Investigational New Drug (IND) and Xenikos is now recruiting patients for a US-based Phase 3 registration trial (NCT04128319) evaluating T-Guard for the treatment of SR-aGVHD following allogeneic stem cell transplantation. T-Guard has been granted Orphan Drug Designation status in both the EU and the US.

Acute graft-versus-host disease
Following allogeneic stem cell transplantation, most patients have a high risk of developing graft-versus-host disease (GVHD), and this risk increases considerably in older patients. With GVHD, the donor's immune cells attack the patient's cells. Acute GVHD occurs early after transplantation and can be relatively mild or quite severe, even life-threatening, if not treated. Although GVHD can often be treated successfully with steroids, few options are available if the disease progresses or becomes resistant to steroid treatment, and the long-term survival of patients with steroid-refractory acute GVHD is less than 20%, highlighting the urgent need for effective therapies.